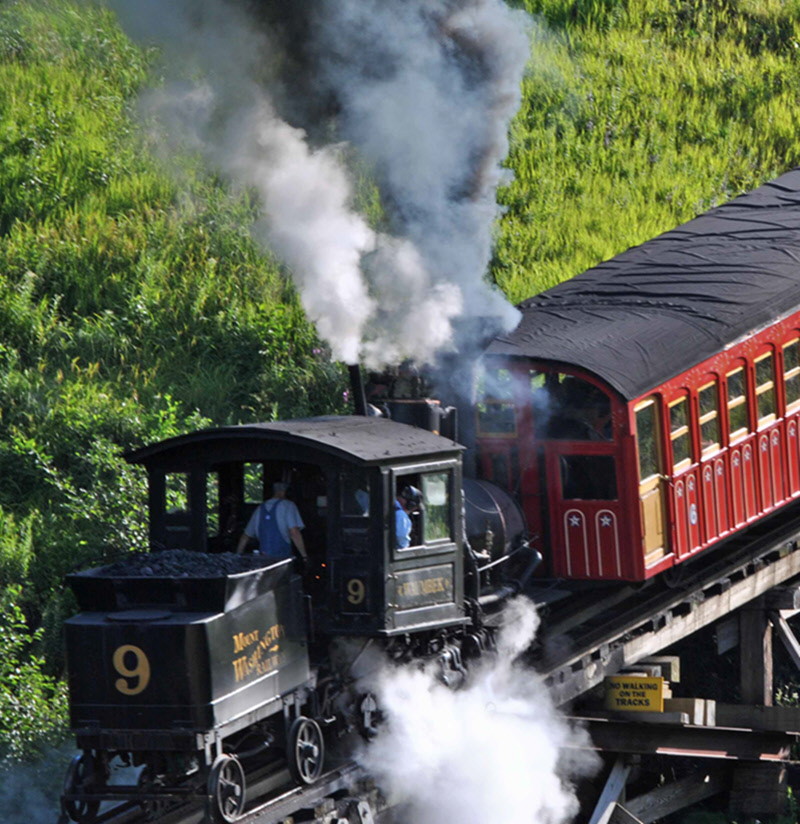 JK Rowling once mentioned in an interview that when she sat on a local London train, that she conceived of the idea of Harry Potter. It simply emerged from in her brain perhaps inspired by the thought of a ride on a train or the history of train travel

In the years just prior to the American Civil War, one 54-year old retired businessman wanted to make a statement about innovation and ingenuity by building a railroad to the top of Mount Washington. His idea was immediately met with ridicule and disbelief from state legislators, railroad officials, and friends. They believed his plan to be foolish and ridiculous.

Nevertheless, he never lost faith in his idea for a rack railway up Mount Washington and he held his ground against the withering dissension of his peers, some of whom even labeled him a “crazy person”. With courage and unfailing determination, he kept faith with his beliefs and did what railroad men of the time said couldn’t be done. He created what he needed and made it happen. To the public, he became a hero, but from friends, railroad men, business associates and politicians, who had doubted his plan was feasible, there came only condescension and jealously.

That man was Sylvester Marsh. 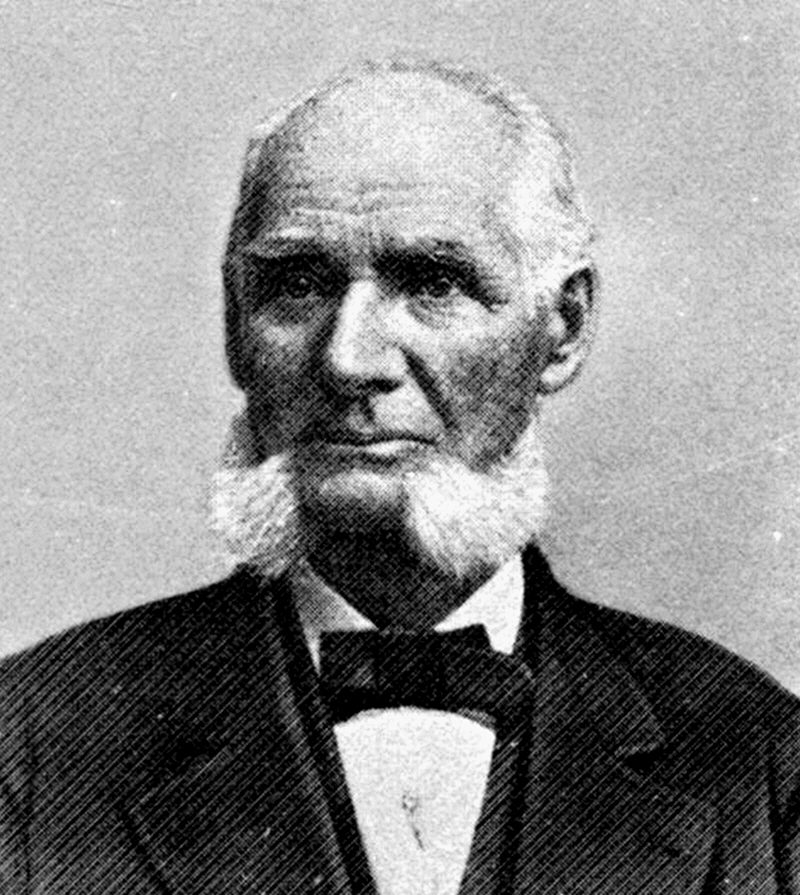 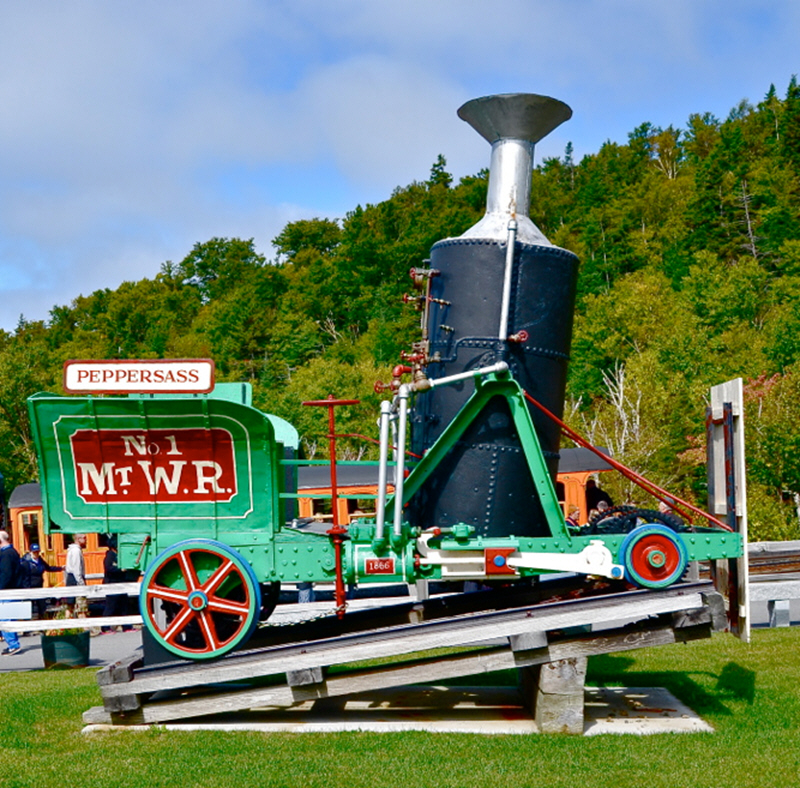 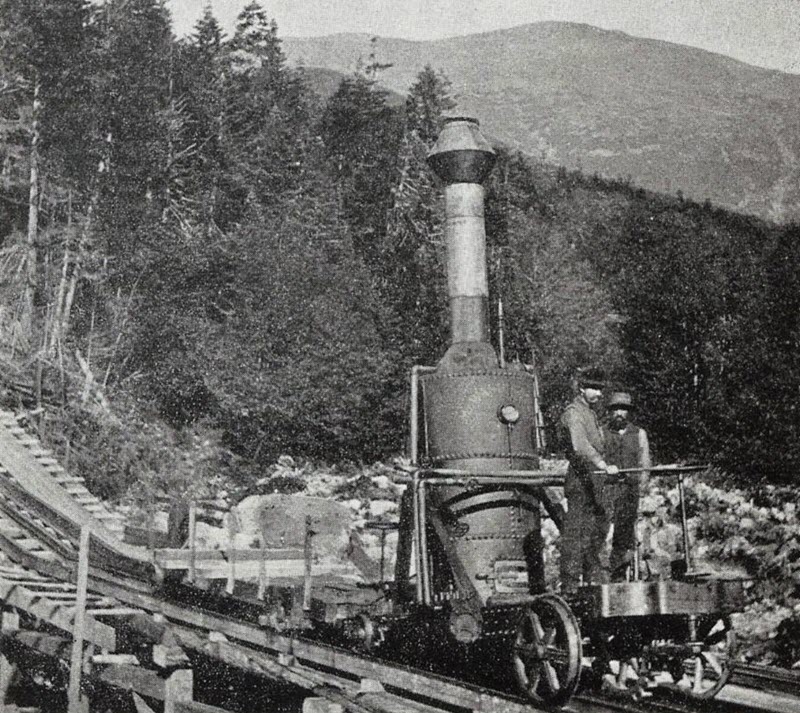 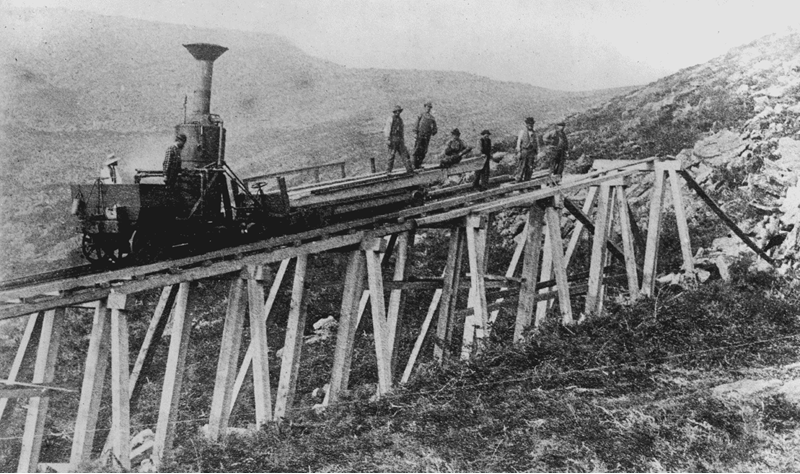 The first engine was named Peppersass as a joke by someone in the crowd of spectators on a demonstration to prove the concept. The name stuck. When the first locomotive engine arrived and was assembled, it looked more like a hoisting engine that might be used to raise a piano to a third-story window in a city rather than a revolutionary machine to climb to the summit of Mount Washington. It had no cab, no provisions for fuel, water storage or even a pump to fill the boiler. It certainly was not suited to make such a climb without these things. It was only intended to prove itself on a track that went about 600 feet up the mountainside.

It was August 29, 1866, when stockholders, railroad officials, and other invited guests arrived at the base of the mountain to witness the demonstration. The locomotive had been named Hero. However, many in the crowd thought it didn’t look like the hero. Someone in the crowd thought that the upright boiler looked like a pepper sauce bottle. A pepper sauce bottle was a common item on kitchen tables of the period. This person called out “There’s your Peppersass!”. Because of this funny statement, and from that moment on, the engine of the cog railway was never known by any other name.

On July 3rd, 1869, the Mount Washington Railway officially opened to the public!

It would soon be acclaimed as one of the great engineering feats of the century. It was 544 days after the golden spike had been driven at Promontory, Utah, which celebrated the opening of the first transcontinental railroad in America, and Ulysses S. Grant was in his first term as United States President.

Grant himself would ride on the Cog Railway later that same summer. 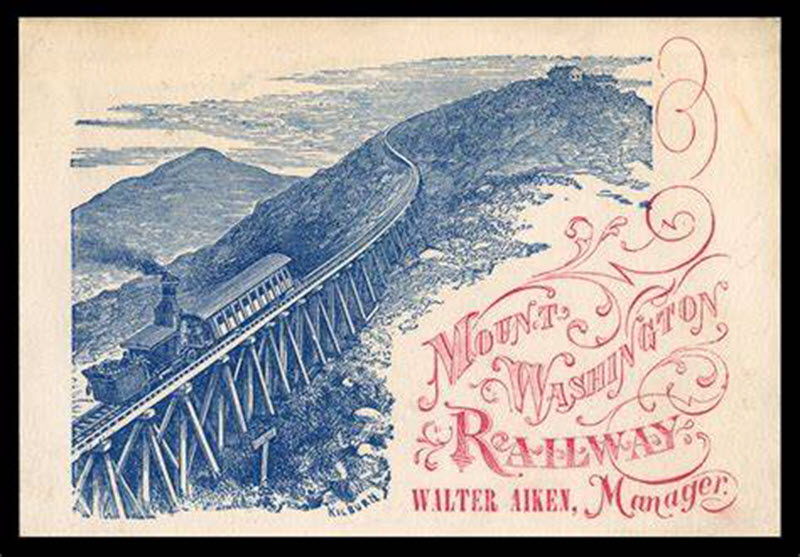 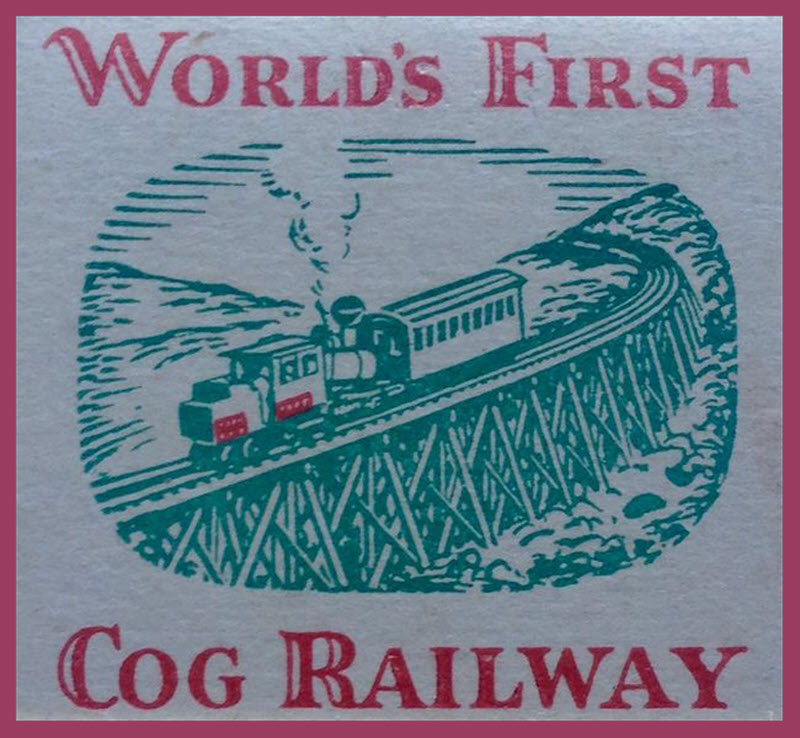 The Boston and Maine Railroad and Henry Teague

In 1895, the Boston and Maine Railroad leased the Concord and Montreal Railroad which included its subsidiary the Mount Washington Railway.

When the great economic depression began in 1929, the Boston and Maine Railroad wanted to divest itself of the Mount Washington Cog Railway. However, no one showed any interest in buying it. After more than a year of unsuccessful attempts to secure a buyer, Henry Teague stepped forward.

He owned and operated the cog railway until his passing in 1951. In gratitude, he left the Cog Railway and all of its property, to Dartmouth College as part of his estate. 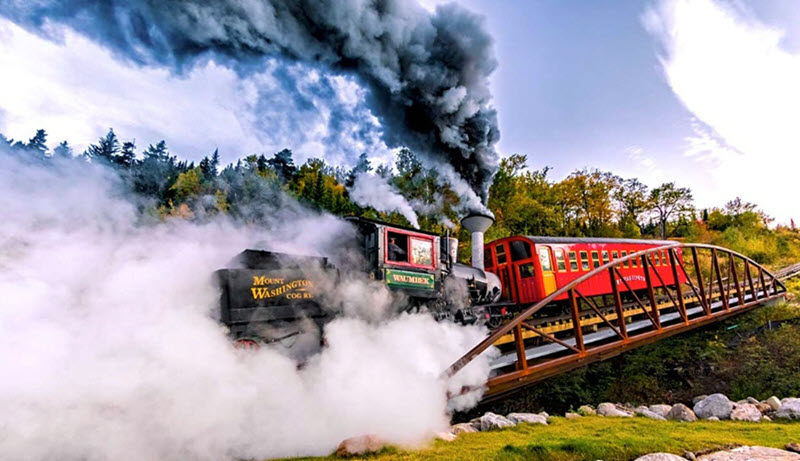 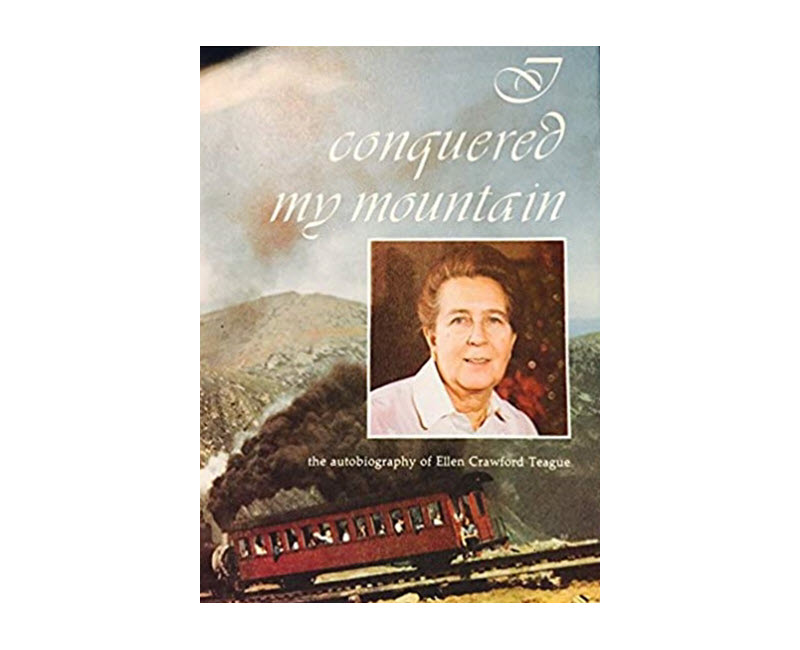 During Henry Teague’s ownership success was achieved with the help of those he hired, and they were often carefully chosen. One such person was Arthur S. Teague, who had the same last name but was no direct relation. Arthur Teague was a very capable man who combined innovative mechanical ability with management skills. He ultimately became Vice President and General Manager. He emerged as one of the most notable figures in the history of the Cog Railway.

After Henry Teague’s death, Arthur Teague remained as the General Manager (now under Dartmouth College’s ownership), and with a mortgage purchased the railway from Dartmouth in 1962.

Arthur Teague’s sudden and untimely death in 1967 came as a great shock to his family, his friends, and the cog railway employees. Ownership of the Cog Railway then went to his wife, and in August of that year, Ellen C. Teague became the world’s first female railroad president.

One of her notable accomplishments was winning exemption for all steam locomotives in the State of New Hampshire from the air pollution act in 1972. It was during her tenure, as president, that the Cog Railway employees built a new steam locomotive for the first time. 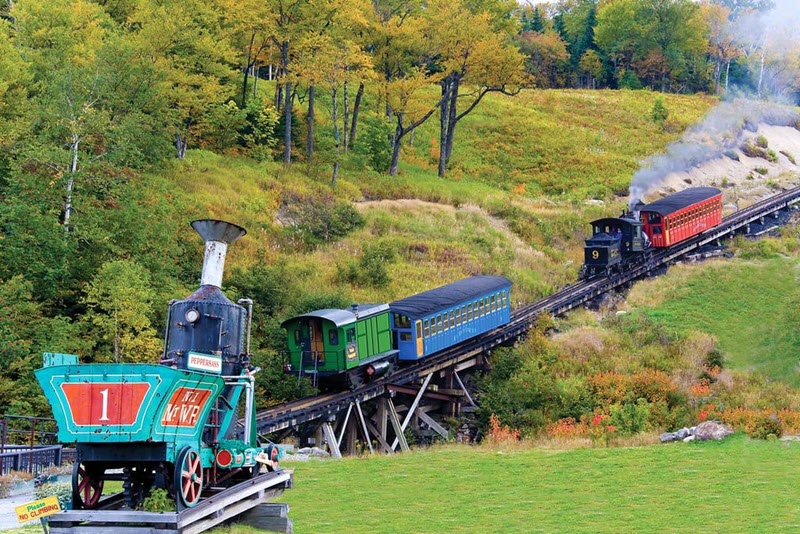 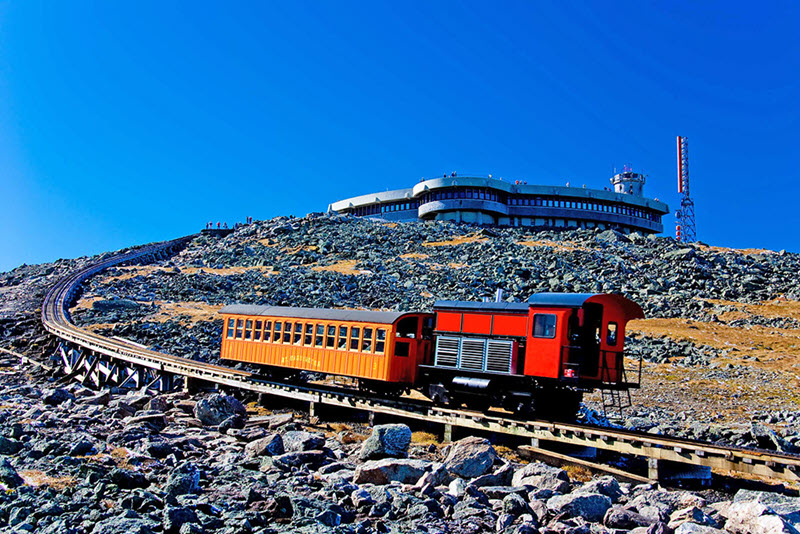 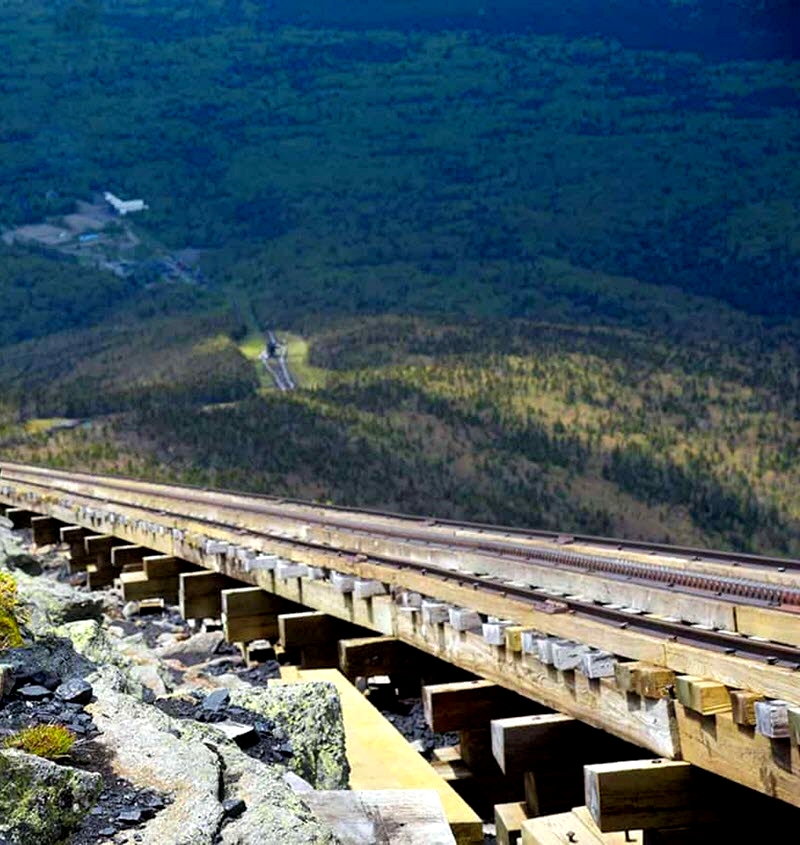 The Cog Railway – Most Recent History

In the early 1980s, the demands of owning and running the railway became too much of a strain for Ellen Teague’s age and her health. In 1983, the cog railway was sold to a group of New Hampshire businessmen. Since the mid-1980s, the owners of the Mount Washington Cog Railway have invested in innovations, improvements, and modernization.

In a time of rough iron and wooden things, the Mount Washington Railway was an outrageous idea. However, enough was properly done in its creation for it to perform well into its 2nd century of operation. It has always been privately owned, first by big railroads and then by a succession of local business people.

Through the influences of many changing eras, it has survived hurricanes, washout, fires, depression, recessions, energy crunches, politicians, experts, well-meaning tinkerers, and bad coal. Many people continue to enjoy the thrill of traveling to the summit of Mt Washington today via the cog railway.